Great Fires Of London & those who fought them

I’ve been crisscrossing the country so far this week so have got a little behind on my blog posts so please consider this an emergency posting!

I mentioned a few weeks ago that I was going to create a few Youtube videos on two channels broadly related to my blogs and tours and writing and so thought today was an opportunity to share one.

When I am out and about around London, I often come across various monuments that are related to fires in London.   Most people are aware of The Great Fire of London which though destroying much of the city, did at least allow the creation of one of the most beautiful buildings in the world, St. Pauls Cathedral.

However, there have been numerous Cathedrals and churches here that have been dedicated to St Pauls and they have all been destroyed or badly affected by fires.  In fact there have been at least a dozen terrible fires in London through the last 2,000 years and several Great Fires though only entitled The Great Fire of London.

The first terrible fire came about when Queen Boudicca rose up with one of the first appearances of ‘Girl Power’ and killed ever Roman she could get her hands on and burnt many cities down to the ground including London.  In fact such was the total destruction that archaeologists use the unmissable black carbon stain in the soil strata as a indisputable method of dating early London finds. 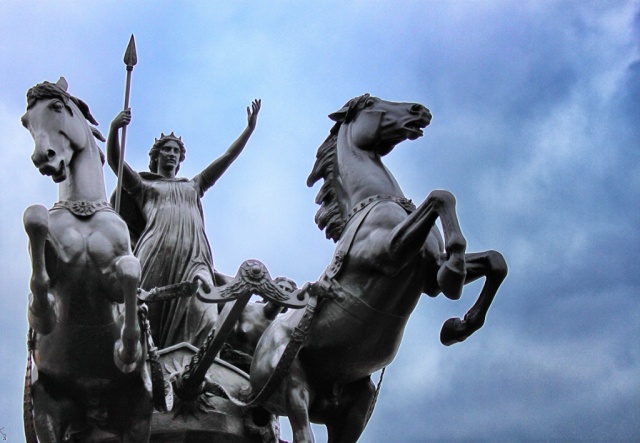 Queen Boudicca who burnt Londinium to the ground and killed thousands in her famous revolt against the tyrannical Roman overlords.

A number of other Great Fires happened in Roman, Anglo-Saxon, Norman and Medieval periods before of course the legendary Great Fire Of London which is commemorated by public works of art such as The Monument as well in the old nursery rhyme below.

Pour on water, Pour on Water

London possessed advanced fire-fighting technology in the shape of what we know today as fire engines which had been used in earlier fires. However, unlike the useful firehooks, these large pumps had rarely proved flexible or functional enough to make much difference. Only some of them had wheels, others were mounted on wheelless sleds. They had to be brought a long way, tended to arrive too late, and, with spouts but no delivery hoses, had limited reach.

On this occasion an unknown number of fire engines were either wheeled or dragged through the streets, some from across the City. The piped water that they were designed for had already failed, but parts of the river bank could still be reached. As gangs of men tried desperately to manoeuvre the engines right up to the river to fill their reservoirs, several of the engines toppled into the Thames. The heat from the flames was by then too great for the remaining engines to get within a useful distance; they could not even get into Pudding Lane where the fire had started in a bakers shop.

Ironically parts of London were saved due to a firebreak that had been caused when a previous fire had destroyed a great number of buildings which had not yet been rebuilt.

The most recent Great Fire of London happened during the Blitz in WW2 when London was bombed for night after night for weeks on end.  Hitler deliberately targeted St. Pauls Cathedral as a symbol of London by using high explosive and incendiary bombs which created a terrible firestorm that devastated everything in the area, except the Cathedral itself.  It is more than a little ironic that St. Pauls survived the most determined effort to burn it down and yet several predecessors were burnt down by accident. 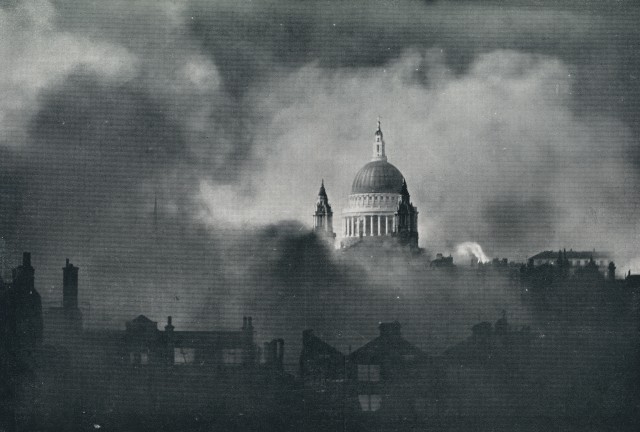 Just across the road from the beautiful Cathedral is the National Firefighters Memorial, illustrating some of the heroic efforts and sacrifices that went into saving St Pauls and the rest of us in wartime and in peace. 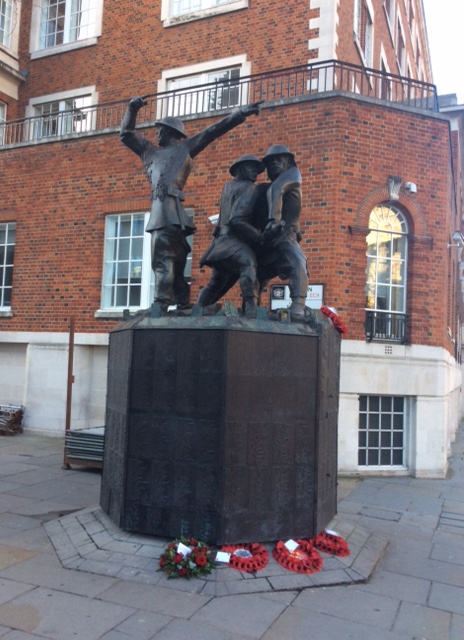 So below is my little video about some of the memorials and history of the Great Fires Of London, I hope you like it!

I am a writer and traveller with a penchant for history and getting off the beaten track. With several books to my name including several #1 sellers. I also write environmental, travel and history articles for magazines as well as freelance work. I run my private tours company with one tour stated by the leading travel website as being with the #1 authentic London Experience. Recently I've appeared on BBC Radio and Bloomberg TV and am waiting on the filming of a ghost story on British TV. I run my own private UK tours company (Ye Olde England Tours) with small, private and totally customisable guided tours run by myself!
View all posts by Stephen Liddell →
This entry was posted in Architecture, Heritage, history, Life, London, Travel, Ye Olde England Tours and tagged Firefighters Memorial, Great Fire Of London, Queen Boudicca, St Pauls Cathedral, The Blitz, The Monument. Bookmark the permalink.

18 Responses to Great Fires Of London & those who fought them