Mass Shootings in the USA are not news, it’s a chosen way of life

It’s not often that I write anything that even vaguely touches on an opinion piece but following the news of the latest in the endless stream of mass-shootings, let alone individual shootings then I thought now would be as good a time as any.

I feel so strongly about this and it isn’t even my country. Mass shootings will always occur so long as so many people have guns. To be honest, though I feel terribly sorry for the victims, I’m getting tired of hearing about the less than 1% of cases we do hear about in the U.K. It’s  just not news when a country time and again has the opportunity to change the law and willfully decides not to and so accepts a casualty rate amongst innocent people.

I remember when I was a young boy and John Lennon was murdered.  I asked my mother how it happened and I still remember what she said all these decades later.  That in America lots of people have guns.  There are some bad people there and if they have guns then sometimes they shoot people.  I asked why would people allowed to have guns, if they didn’t have guns then no-one would get hurt?      My mother couldn’t adequately answer the question then just as I can’t believe that the situation has only deteriorated now.

I don’t have a gun. I must admit that if the worst happened then I suppose I could hit someone.  I never have hit anyone in my 42 years but I could hit someone.  Maybe they might get hurt, perhaps even hospitalised for an hour or so.  If I were deranged then I might even stab one or two or five people but it is physically impossible for me to shoot 20 or 50 people. If somehow I turned into Rambo, stole some guns from the Army (which would be hard as I don’t have a gun) and did then shoot people in this country then it would be news. In the USA it is just another form of acceptable death to go along cancer caused by smoking, or road accidents. You can ban all smoking related deaths by banning cigarettes. You can ban all road-related deaths by banning vehicles…. we choose not to as vehicles can be useful so we make laws that save 99.9% lives so we can all travel and go about our lives and accept that in some very sad occasions, innocent people will die so we all can travel quickly. 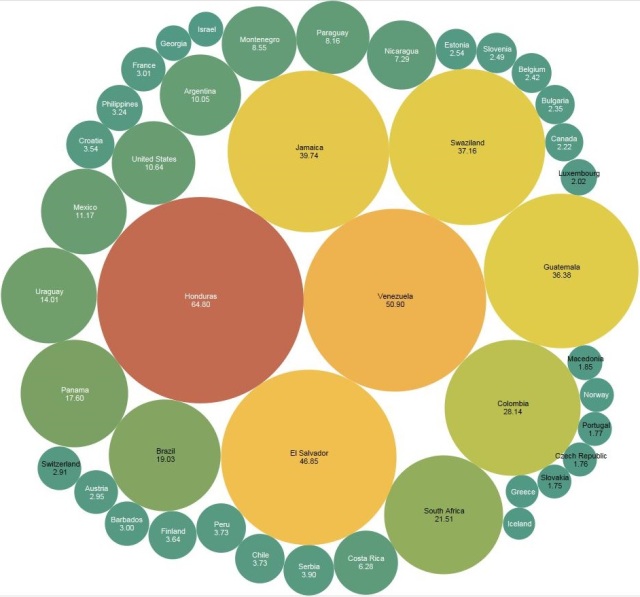 List of countries by firearm-related deaths.  Britain where even the police don’t have guns, surprise surprise don’t seem to have people who generally shoot each other.

Guns aren’t useful, their sole purpose is to kill people. If the people of the USA really want to change it or heaven forbid amend their constitution (is that where you get amendments from?!?) then they need to do mass peaceful protests at Congress and stay there for weeks or even months. Everyone needs to go on strike for a few days and things will change very quickly. Having a society where so many have guns and some people actually use them is not news, it’s life. Yes it would take time for a gun ban to make a difference but by the time our grandchildren are our age then it would be very different.

If you wanted to hurry things up a little, the government could use that huge military and systematically, house by house, search every property and remove the firearms. It’s not complicated, it might annoy vested interests but it only needs the will to do it. It’s really really simple actually. If no-one has guns, no-one can use guns and no-one will die from guns. Americans are roughly 50 times more likely to be killed by guns than British.

Don’t worry about the British, we’ve moved on from sending guys with muskets to raid a few farmsteads.  If for some crazy reason we decided to start a war with America, the SAS could kill any crazed gunman from miles away. However, even more unlikely than us British attacking our closest ally, would be to do so just to steal some guys TV or SUV.   Sof if we have changed then the people who look after the American Constitution should too. If the only reason is that people want to defend themselves against the state then let them come in their front yard she see how effective guns are against drones, apache gunships and nukes.

It might be a surprise but most of us around the world go our whole lives without using a gun, needing a gun or even seeing a gun and we kind of get by perfectly ok.  What’s more most of us don’t get shot.

There seems to be so little if any difference to me between Christian Republican Fundamentalists and the hardest of Iranian or Saudi clerics. Both hate women. Both don’t want abortion. Both are big time into Capital Punishment. Both believe God loves them and few others.  Both think everyone should live by their narrow concepts and beliefs. Both might be corrupt but at least the Iranian government is corrupt by God not selfish capitalism.

On balance though, the Iranians come out much better as they aren’t inherently racist against black people, don’t kill anyone for oil or money and aren’t obsessed by money and profit.   Why worry about half the planet supposedly wanting to kill you (which actually we don’t) and instead worry about the thousands of Americans needlessly killed by Americans.  I’d call that terrorism… maybe the other nations should add Washington to the list of terrorist-sponsoring states who hold their population subjujated to terrible cruelties and backwards ways of living just as was levelled at Iraq, Libya, Russia and many other nations.

To see someone take apart the opposition to gun control in a hilarious way, I really recommend the video below by Australian stand-up comedian Jim Jefferies.

I am a writer and traveller with a penchant for history and getting off the beaten track. With several books to my name including several #1 sellers. I also write environmental, travel and history articles for magazines as well as freelance work. I run my private tours company with one tour stated by the leading travel website as being with the #1 authentic London Experience. Recently I've appeared on BBC Radio and Bloomberg TV and am waiting on the filming of a ghost story on British TV. I run my own private UK tours company (Ye Olde England Tours) with small, private and totally customisable guided tours run by myself!
View all posts by Stephen Liddell →
This entry was posted in News, Opinion, Uncategorized and tagged Australian Comedian guns, Death, Gun Control, Guns, Jim Jefferies, Life, News, Shootings. Bookmark the permalink.

28 Responses to Mass Shootings in the USA are not news, it’s a chosen way of life