Leavesden Asylum – A Victorian Hospital with a modern twist!

I’ve written once or twice before in passing on Leavesden Hospital and a possible extremely infamous former patient there.  Recently I went on a walk with a friend of mine ostensibly to create a book promo video for a novel which I’m in the process of writing. Leavesden Asylum was a vast site that was built in 1870.

It was built by Victorians who recognised that there were some poor in the London workhouses that could not be safely housed and cared for and though some of their practices might seem cruel to us today, it was a genuine attempt by the healthcare of the time to treat patients with mental difficulties as best as they could in the most humane conditions possible. 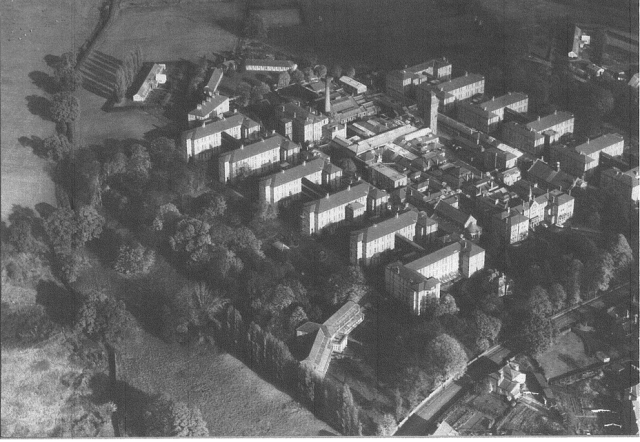 Though Leavesden is now almost on the edge of London, 150 years ago it was a remote location, useful for housing sometimes criminally dangerous patients over a days travel from the busy capital city. The 78 acre site housed “quiet and harmless” imbeciles from north London in a totally self-sufficient estate which cost the vast sum of £145,000 in the currency of the day. 860 women were housed in 6 separate and identical looking blocks whilst 700 men were housed in five separate blocks. 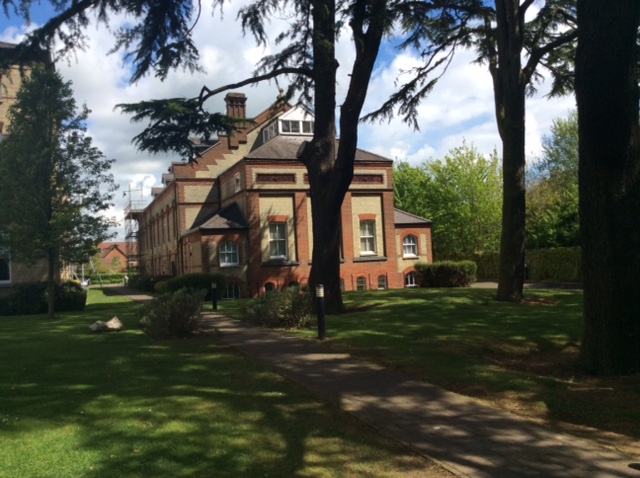 There was also a medical area, exercise gym, administration office, church, farm and various ancillary buildings such as boiler-rooms and laundry rooms. Patients at Leavesden suffered from various mental impairments and conditions and a small number who were capable of working were taken under strict supervision to various working areas. Women tended to work with the laundry, needleroom, and female staff quarters. 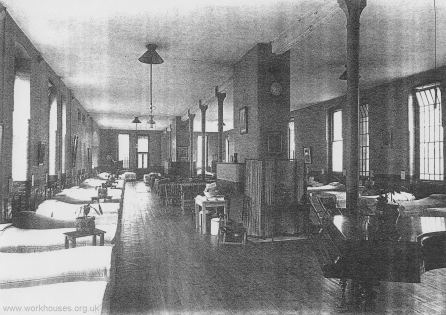 Men performed more physical tasks such as gardening, on the farm, in the shoemaker’s, tailor’s, upholsterer’s and paint shops, and in the laundry kitchen and bakehouse. Patients who were unsuitable for these jobs were employed on the wards, scrubbing and corridors and stairs. 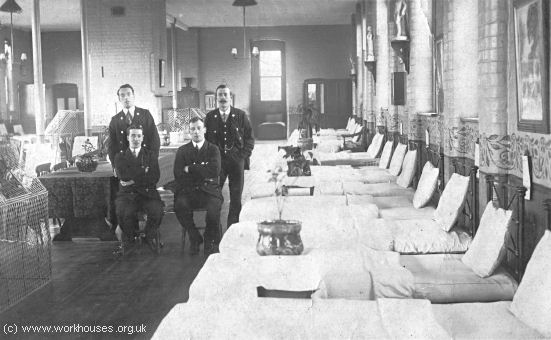 Discipline in the asylum was extremely strict both for patients and staff. The sexes were strictly segregated and apart from the weekly dance and chapel service there was no mixing and  at the chapel men sat at one side, and women at the other. Staff were not allowed to mix in the grounds or even talk over a fence during off-duty periods under threat of dismissal.

Leavesden Doctors Houses from the 19th century. One of them has a plaque on the wall for a brave fallen soldier of WW1.

The staff day-duty ran from 6am until 8pm with 1½ hours off for meal breaks. Sub-officers were allowed one day’s leave every four weeks. Male attendants were expected to salute Medical Officers as a sign of respect. Even senior officers were not exempt from the rules. The Medical Superintendent and Matron were reprimanded for visiting each other’s quarters. Even the Chaplain was reported for breaking the rules by jumping over the fence to his house rather than going out by the front gate as was required. 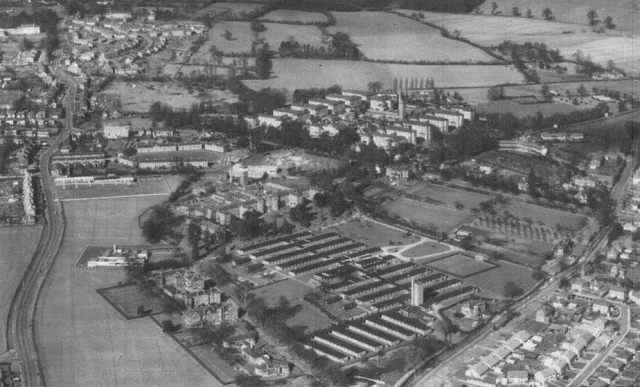 Photo showing Leavesden Asylum above and the Canadian Hospital below (now parkland). The new 1950’s housing in Leavesden is visible on the right with Abbots Langley village in the top left. Look to the far right near the top to see the wooded cemetery and the Incinerator which I have photographed further down.

Across what was then Asylum Road but is now College Road was originally St. Pancras Workhouse which housed mostly the poorest of the poor from the Camden area of London including many orphans or abandoned children.  Later on the site became home for a Canadian Military hospital for the Infirm during the war before all the buildings eventually came under the renamed Leavesden Mental hospital which at times housed many thousands of people.

Some of the records are online though some are hard to find.  It seems sad to modern sensibilities that various patients death certificates have them labelled as idiots, dumb, imbecile and lunatic As our understanding and treatment of those with such problems has grown and concepts such as “Care in the Community” became seen as preferential to incarceration the requirement for such a large hospital ended and in the 1990’s the majority of the hospital was closed down.

A small Leavesden NHS facility remains to care for low security patients but the vast majority of the site was levelled.  Much of it was sold off to make way for much needed housing whilst a 57 acre country park was established in the remaining area.

Resting place of Jack The Ripper?

One of the fun aspects of history is exploring locations and gaining glimpses into what links us to the past and there are some tantalising links in modern day Leavesden with the 19th Century hospital.   Of course there is the East Lane Cemetery which now open to the public, at least to members of the public with a certain disposition.  A second cemetery is entirely overrun with woodland and last year it was rumoured that a third cemetery has been located. 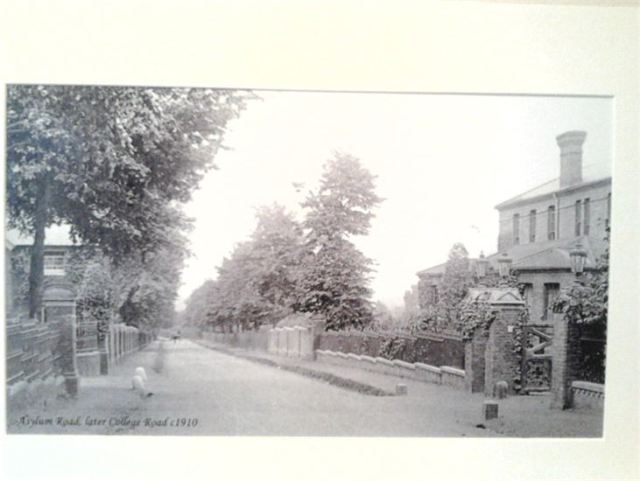 The gate-house or porters house still remains at the entrance alongside the impressive Victorian railings.  It was at this building where relatives of the patients could briefly meet their ill family members.

College Road Leavesden, once Asylum Road. The house is now hidden behind the trees on the right but the road and trees are clearly the same.

Though it was thought best to demolish the actual hospital wards, the beautiful, large and imposing Administration block remains as a series of luxury flats and private dwellings as does the exercise block.  It is hard to believe that these huge buildings comprise of about just a sixteenth of what was once here, not counting the large hospital across Asylum Road.  Some sort of boiler house remains a good ten or fifteen minute walk away from the Admin block and the roads, footpaths, trees and hedgerows remain recognisable in places and I have stumbled across more than the odd concrete and brick building foundations around and about the site. 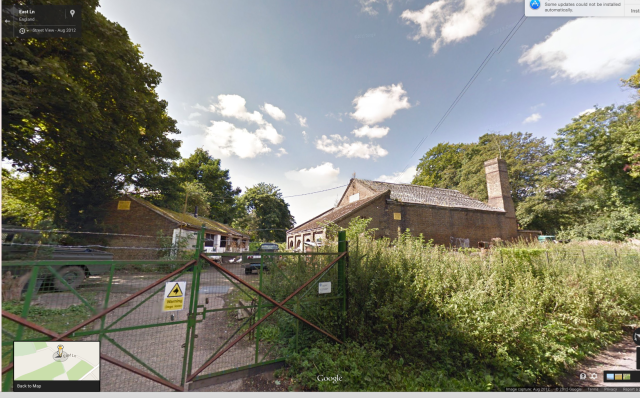 Leavesden Asylum Incinerator or boiler room. You can see the chimney on some of the old photos. Sadly this and a nearby house have fallen into severe disrepair in the last 2 or 3 years and seem to be owned by someone who spends all his time chopping and burning wood.

As I was showing my friend around the remaining old hospital buildings we were peering inside the doors of the old chapel when to our surprise they opened and we were invited inside.  Not sure what to expect and not wanting to impose, we were at first reluctant to enter but we were glad we did.  It turns out that the NHS and local council sold the chapel to a charity named Demand We were shown upstairs into the offices, all the original features of the beautiful Victorian Chapel remained but were combined with a modern 21st century office.

The Demand Offices upstairs in a new Mezanine floor in the original Leavesden Asylum Chapel.

We were made to feel very welcome by the Chief Executive Gary Evans who took 15 minutes out of his time to talk us through the history of the site as he knew it as well as showing us some old plans and photos, some of which he has kindly allowed me to post here.

It turns out that Demand is a charity that designs and manufactures specific equipment for disabled people in all areas of life and the downstairs of the old chapel is in fact a large and modern workshop.

Part of the Demand Workshop which makes custom made equipment to improve the lives of disabled people.

In a way this corner of old Leavesden Asylum is playing the same role as the original creators of the hospital back in 1870 as Demand is helping disabled people live independent, happy and productive lives.  The methods may have changed but the goals remain the same. In the probable thousand times or more I have walked through the old hospital grounds I had no idea that the chapel was occupied so fruitfully in this way and it is another link to the past origins of the site.  Demand is reliant on donations and does very good work so do have a click on their website above.

Leavesden Admin Block around 1910. That big tree on the right is now huge!

If you like history then don’t forget my new book 101 Most Horrible Tortures in History.

I am a writer and traveller with a penchant for history and getting off the beaten track. With several books to my name including a #1 seller, I also write environmental, travel and history articles for magazines as well as freelance work. Recently I've appeared on BBC Radio and Bloomberg TV and am waiting on the filming of a ghost story on British TV. I run my own private UK tours company (Ye Olde England Tours) with small, private and totally customisable guided tours run by myself!
View all posts by Stephen Liddell →
This entry was posted in Heritage, history, Life and tagged churches, Culture, Demand, history, Jack The Ripper, Leavesden, Life, Local History, Victorian. Bookmark the permalink.

26 Responses to Leavesden Asylum – A Victorian Hospital with a modern twist!