Todays posting isn’t going to be about some wishy-washy subject.  I’m going to write about something important and something which is killing thousands of people every month, the civil uprising and war in Syria.   I’m writing because it is important and we CAN do something.  Up to 5000 people a month visit this blog, that is a lot of people who can do something.  It is also the same number of people who are dying each month in Syria.

Peaceful Civilian marches and demonstrations for democracy and free elections in Syria.

For over 2 years now, the brave people of Syria have been rebelling against their dictator.  At first the protests were peaceful and to a degree they were tolerated.  The Syrians were enthused by the democratic changes taking place in Tunisia, Egypt, Libya as well as protests throughout the Middle-East as part of the Arab Spring.   Their target was the overthrow of the Assad regime who have ruled over Syria for decades.   The President, Bashar Assad, was never brought up to be a President (read Dictator), he spent much time in London working to become a specialist optician but his elder brother was killed in a car crash and he was quickly and badly groomed to succeed his father.  He was destined to become an eye doctor but now Bashar Al-Assad is simply Dr Death, the first great war criminal of the 21st Century. 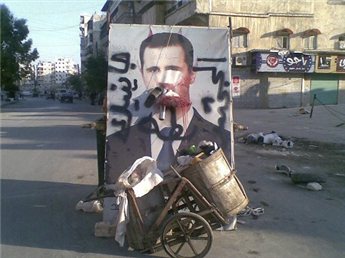 Any leader who has his image on public display outside of election time is a dictator.

The people of Syria had every right to expect assistance from friends and democracies from across the world.  When it comes down to it though, there are only a handful of countries who are altruistic enough to help downtrodden people and of those only 3 nations have the history of assisting foreign states and peoples, the United Kingdom, United States and France.  Other countries may be richer (Saudi Arabia), stronger (China), bigger (Russia) but they don’t help anyone as they don’t have a history of freedom and human rights and in fact they actively oppose these simple ideas.  Of course the UK, US and France look out for their own interests too but sometimes, just occasionally we make a moral stand even when it costs us a lot and benefits others or even everyone, when we could very easily turn a blind eye as they do in so many other places.

This time though it didn’t happen.  Partly due to exhaustion and a feeling of “let someone else do the hard work” due to wars in Iraq and Afghanistan.  Yet with just a bit of help, Syria could have been resolved as quickly as Libya was and we would have the gratitude of the nation.  Largely though, nothing has happened because Syria is too close to Israel and Iran and no-one is quite ready yet to risk starting a huge war and also because Russia does not want to lose practically its last ally overseas.

The rebels now hold much of the country though with main cities torn in two.

The rebels are making progress but it is a slow and bloody progress.  Teenagers and young men armed with rifles, fighting a Russian backed army armed with jet planes, missiles, tanks and chemical weapons.   If weapons or military assistance is not forthcoming then it might take years for Assad to be overthrown.  It might not ever happen.

One of the smaller massacres in Syria by government forces. As gruesome as this is, there are easy to find photos on google of even the dead bodies of little girls all less than 5 years old.

Thousands of civilians and lightly armed rebels are being killed every month.  State troops massacre civilians almost as a matter of routine.  Children are shot at and bombed in their houses.  Fathers and mothers are killed whilst going about their daily business and grandparents see their entire families of 12 or 14 people killed by a random rocket attack or village massacre.

You might wonder why we should care, let alone help these people.  Syria after all is not famous for helping anyone in the last few centuries but helping someone shouldn’t depend on what they have done for you.  Over 3 million Syrians have become refugees in recent months, living in tents and placing terrible burdens on Turkey and the impoverished but generally kindly nation of Jordan.  10% of Syrians are Christians so for those who think this is a Muslim only problem then just by the laws of average, 7,000 Christians have died in this uprising.  They and their fellow Syrians have no-one to help them except us.

This village has been levelled by the Syrian Military. Claims that the rebels are doing this are ludicrous. How many millions of rounds of ammunition from a rifle would it take to level a village?

We though, can help.  We have our PC’s and emails.  All of us writers and readers on WordPress are nice people, if we weren’t we would be off doing horrible activities instead or writing, reading and spreading love 🙂

We can all write to our elected representatives.  Whether you voted for them or not, it is their duty to listen and act on your complaints and suggestions.  Our taxes pay for their salaries.  I have done the hard work for you and found much of the information below.  Now, all you have to do is write.

If you are in the United Kingdom, you can find your elected Member of Parliament at http://www.theyworkforyou.com

If you live in the Unites States, you can contact your Senator at http://www.senate.gov/general/contact_information/senators_cfm.cfm

Write to them and tell them you want to help the people of Syria who are only fighting to gain the rights and freedoms that we all enjoy.

Email the Chancellor of Germany, angela.merkel@bundestag.de and ask her why she is happy to spend so much money on the Euro that is causing chaos across Europe but vetoing moves to help the Syrian Rebels.

Email, the British Prime Minister telling him your views  https://email.number10.gov.uk/Contact.aspx

Write to President Obama and tell him you think it is his duty to help the Syrian rebels and refugees by visiting: http://www.whitehouse.gov/contact/submit-questions-and-comments

Though as a war criminal himself for his actions in Chechnya, President Putin of Russia doesn’t care about his own citizens, let alone us or the people of Syria, still write to him by visiting http://eng.letters.kremlin.ru/send

Alternatively email the Russian embassy in London at foreignpolicy@rusemb.org.uk   or phone their embassy in Washington on Phone: (202) 298-5700

Writing to our politicians and leaders is a good thing to do, it is part of the democratic process which we all have but the people of Syria do not.   Syria is home to some of the oldest cities in the world.  Damascus, Aleppo and others are up to 8,000 years old.  Isn’t it about time they had their freedom too?  The longer this war goes on, the worse it will be for them and us.  If you were Syrian and you knew the people you looked up to and thought would help turned a blind eye it isn’t hard to imagine them taking a dislike to us.  Ask any Libyan what they think of Russia and China.

Just as importantly as writing to the people above is the fact that the people in Syria are dying now because they don’t have enough medicine, food and water and shelter. 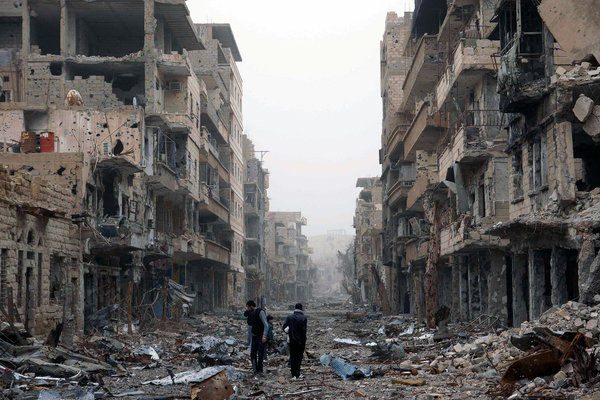 Deserted cities, their populations fled or dead after onslaughts by Syrian tanks, jet planes and rockets.

There are a number of international charities you can donate to.

The United Nations Refugee Agency have an appeal like many other UN related bodies.  http://donate.unhcr.org/syria-uk

Donations to the Red Cross will go directly to providing aid to civilians. http://www.redcross.org.uk/Donate-Now/Make-a-single-donation/Syria-Crisis-Appeal

Medicine Sans Frontiers is a wonderful charity dedicated to providing emergency medical aid to people who need it most and yet have no means of accessing local care. http://www.msf.org.uk/country-region/syria

The websites may have UK addresses but I have checked them and if you have a bank card or paypal then you can pay wherever you are.  MSF takes currencies all on the same page whatever your nationality.

Instead of buying a pizza or over priced coffee, give the money and dour body a small favour and someone else a huge one.  Instead of writing a blog today or this weekend, write out an email and send it to everyone listed above.

In the last month, I have lost my job and my mother and I can say, in the big scheme of things that doesn’t matter one bit.  Don’t feel sorry for me, feel sorry for them.  What does matter is helping the 3 million refugees and doing whatever you can to make sure in 2 years time the death toll in Syria stays at 75,000 people and isn’t 250,000.

A young boy lies dead in his father or older brothers arms.

Share this posting with your friends and colleagues or re-post it on your site.  Send a link or email to anyone who has a heart, a keyboard and a spare penny to donate.  Do something good and help make a difference today.

I am a writer and traveller with a penchant for history and getting off the beaten track. With several books to my name including several #1 sellers. I also write environmental, travel and history articles for magazines as well as freelance work. I run my private tours company with one tour stated by the leading travel website as being with the #1 authentic London Experience. Recently I've appeared on BBC Radio and Bloomberg TV and am waiting on the filming of a ghost story on British TV. I run my own private UK tours company (Ye Olde England Tours) with small, private and totally customisable guided tours run by myself!
View all posts by Stephen Liddell →
This entry was posted in News, Opinion and tagged Arab Spring, Life, Middle-East, News, President Assad, Rebels, Syria, Syrian Charity Appeal, Uprising, war. Bookmark the permalink.