A trip through the Shires – not a Hobbits journey

Posted on September 30, 2012 by Stephen Liddell

The more eagle eyed readers may have noticed that I have been away for a week. Traditionally I always go on holiday in the last weekend of September.  Apart from my wife having her birthday during this time, the accommodation is usually much cheaper than high summer, the tourist sites much quieter and often the weather seems to be much nicer.  Also though it is a nice break in the year and helps fill in the gap to the Christmas holidays.Not this year, the weather I mean.

This year we had booked a cottage in the South Shropshire Hills.  Loving isolated places I could not have found a more suitable place.   Shropshire is a very rural county about 3 hours drive vaguely north-westerly from London though motorway connections make it an easy journey at least to the Birmingham area when the motorways peter out and the long windy roads begin.  Shropshire is dotted with beautiful market towns such as Shrewsbury and Ludlow with lots of history and more tudor style houses than I have ever seen before.  Over my next few posts I will cover a few of the highlights which I visited last week. 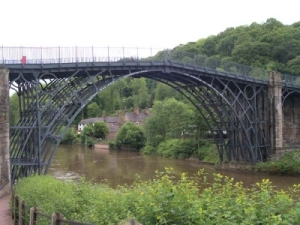 Ironbridge spanning a gorge in Shropshire. The first Ironbridge in the world.

We also took along my friend Dave who happily for me volunteered to do all the driving.  A week with no driving, now that’s what I call a holiday!  We drove out to Shropshire last Sunday afternoon in torrential rain as the remnants of a hurricane decided to set up camp for several days just above where we would be staying.  That’s okay, though no-one wants pouring rain, if it has to rain for 36 hours then it’s better to get it out of the way.

Hardly anyone I had ever spoken to had ever been to Shropshire, it being bypassed by the motorways and not directly enroute between many major cities.  However those few who had been there promised it would be beautiful and how right they were.   Once past Kidderminster we drove through green fields, through woods and over hilltops and a moor before arriving in the Teme Valley.   The Teme Valley is in an official Area of Outstanding Beauty and driving up the main A49 road shows why with wooded hills on both side of the valley which also sites a river, several castles.

The small town of Craven Arms which was pretty much just a Coaching pub until the arrival of the railways.

We arrived at Craven Arms the small town near which our cottage was situated at 6pm and we were anxious to find our cottage before darkness fell.  Despite our best efforts and twice doubling back we couldn’t find a road that went anyway near where we wanted to go.  We knew that we were just 2 or 3 miles from our destination but as is often the case, the final mile is often the hardest.

Could that be our cottage in the distance?

Playing on a hunch we went down the only single track  lane that seemed to go in the right general direction and after two or three miles of twists and turns we found ourselves at the bottom of dirt road that led up a hill to our cottage. 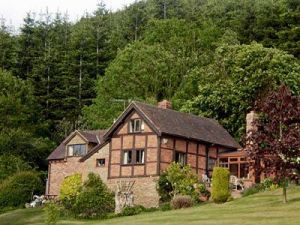 We had found our cosy little home for the next week perched high up on a hillside underneath a pine forest and a folly.  Inside was an old farmhouse with exposed wooden beams and an open fire which the owners had thoughtfully lit as well as leaving us a pile of fresh scones with home-made plum jam and clotted-cream.  Come to Daddy!

Living room from the doorway. 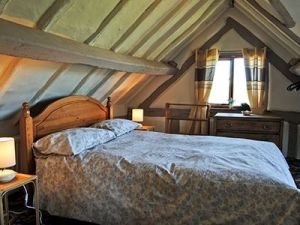 A beautiful bedroom, just be careful with your head when you get up.

This is where we spent a lot of our time just sitting watching the views.

Centuries ago this cottage was the Game Keepers cottage for the local manor house and the surrounding woods are teeming with sheep, cattle and wildlife.  It was great sitting in the conservatory just watching the view.  We couldn’t see any houses, roads or even cables as the house is powered by solar power and a wind-turbine with its own water supply.   A few times in the week we heard a train and for about 2 seconds we saw a car headlight on the opposite hillside but aside from that we were alone.

I am a writer and traveller with a penchant for history and getting off the beaten track. With several books to my name including a #1 seller, I also write environmental, travel and history articles for magazines as well as freelance work. Recently I've appeared on BBC Radio and Bloomberg TV and am waiting on the filming of a ghost story on British TV. I run my own private UK tours company (Ye Olde England Tours) with small, private and totally customisable guided tours run by myself!
View all posts by Stephen Liddell →
This entry was posted in Travel and tagged countryside, holidays, shropshire, Travel. Bookmark the permalink.